Welcome to the Soft Machine!

It was William Burroughs who, in the early 1960s, in his eponymously named cut-up novel, described the human body as a ‘soft machine’, constantly besieged ‘by a vast, hungry host of parasites’. Meanwhile, the ‘soft machine’ has morphed into a cyborg-age body cipher. In narratives and in reality, humans and machines often merge in surprisingly new, sometimes critical ways. In this way, they drive discourse. With their exhibition Invitation of the Soft Machine and Her Angry Body Parts Jakob Lena Knebl and Ashley Hans Scheirl playfully and humorously make various facets of contemporary body discourses resonate. Knebl and Scheirl transform the Austrian Pavilion in the Giardini into an open stage that invites the audience to explore the ‘spaces of desire’ staged by the Viennese artists. In this temporary staging, the two unfold their artistic universe with paintings, sculptures and photographs, through textile works, writing and video, to a fashion collection and a magazine. The Soft Machine materialises in the form of a literal ‘exhibition being’ whose individual parts merge into an organic, living whole. The pavilion is transformed into an inviting, ‘heterotopian’ space where art, performance, design, fashion and architecture come together in exciting, ironically humorous, futuristic hybrid forms.


THE INSTALLATION AT THE AUSTRIAN PAVILION

Jakob Lena Knebl and Ashley Hans Scheirl focus on the structural conditions of the Austrian Pavilion’s symmetrical architecture, which is both divided and connected by a colonnade. Each of the two main spaces bears the mark of one of the two artists. While the two individual positions remain distinct, they are also in conversation with each other. Thus the various materials, modes of operation, symbols, and forms appear to oscillate between the two presentations and are duplicated and mirrored. The side pavilions earmark the artist duo by way of a reflecting lllusionist spatial situation.

Jakob Lena Knebl’s expansive installation elude clear-cut classifications. It displays the artist’s current interrogation of the 1970s, especially the sociopolitical issues and the history of art and design of that decade, and reflects their potent influence on the present day. Key aspects in this context include identity and the possibilities of its transformation, the places of its staging, and the question of co-producers and mechanisms of exclusion. The scenography of Knebl’s work in the pavilion is dominated by opulence. A sci-fi landscape extending the length of the pavilion’s rear wall sets a surreal scene that appears at once utopian and dystopian. It is framed by a steel structure inspired by the architecture of the Centre Pompidou. Life-sized hybrid sculptures of ceramic, leather, fibreglass, extiles, and steel that challenge the arbitrary dividing line between art and design share the exhibition space with visitors. Classical craftsmanship is combined and interwoven with polyurethane casts based upon digital, 3D printed models.

Ashley Hans Scheirl’s installation is a walk-in self-portrait as a painter. A red velvet curtain is pushed aside by the artist’s painted hand. As in a theatre proscenium, we see a staggered arrangement of flat pieces of scenery that at the same time make up the layers of this fold-out painting. As we enter, two different-sized eyes regard us from the rearmost wall with an ambivalent emotional expression. Above is a white, long-haired pubic mound, from which an oversize tube runs into the room. It ejaculates a clear yellowish ‘liquid’ into the room, leaving a puddle beneath the curve of a long hairstyle. From atop a shaggy hill, medicine-spewing tank guns are trained covetously on a shiny chunk of gold. An angrily gaping mouth adorns a living-room wallpaper from the 1970s. Behind it, a piercing ring is thrust through a cloud-shaped sky. Turning around, high above the entrance, the visitor sees a cushioned anus excreting a golden worm of paint into the room.

The two artists’ joint installation is characterised by a dynamic juxtaposition and intertwining of different, seemingly paradoxical spaces, styles and pictogramme-like symbols that all seek to garner the visitors’ attention with their own particular devices. The visitors, in turn, become protagonists in this piece, setting the scenery in motion with their bodies. 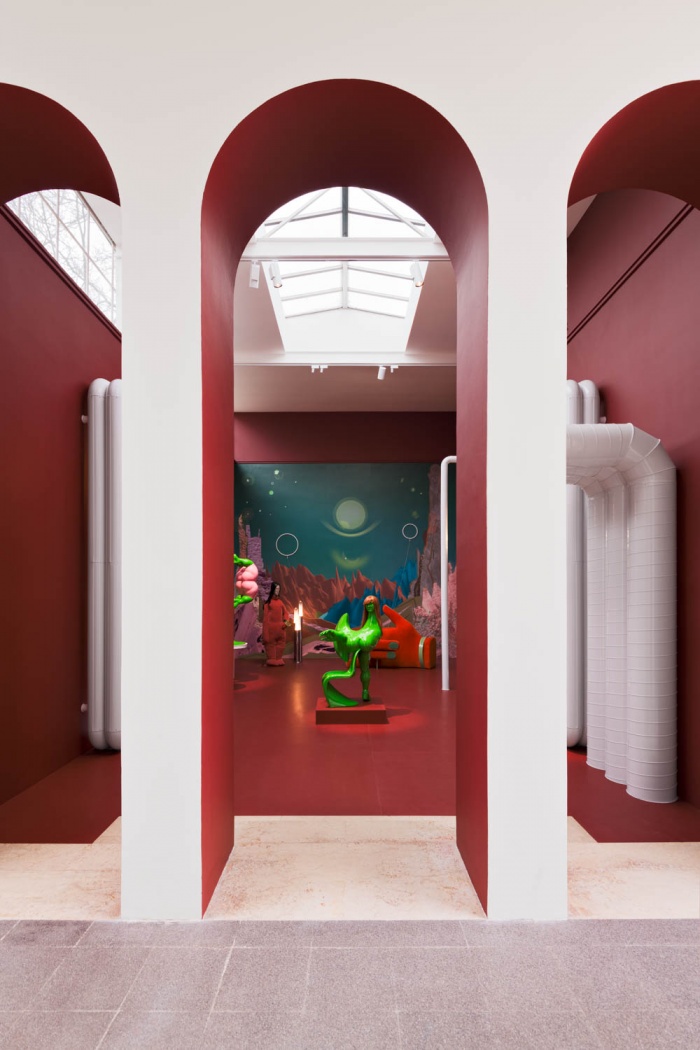 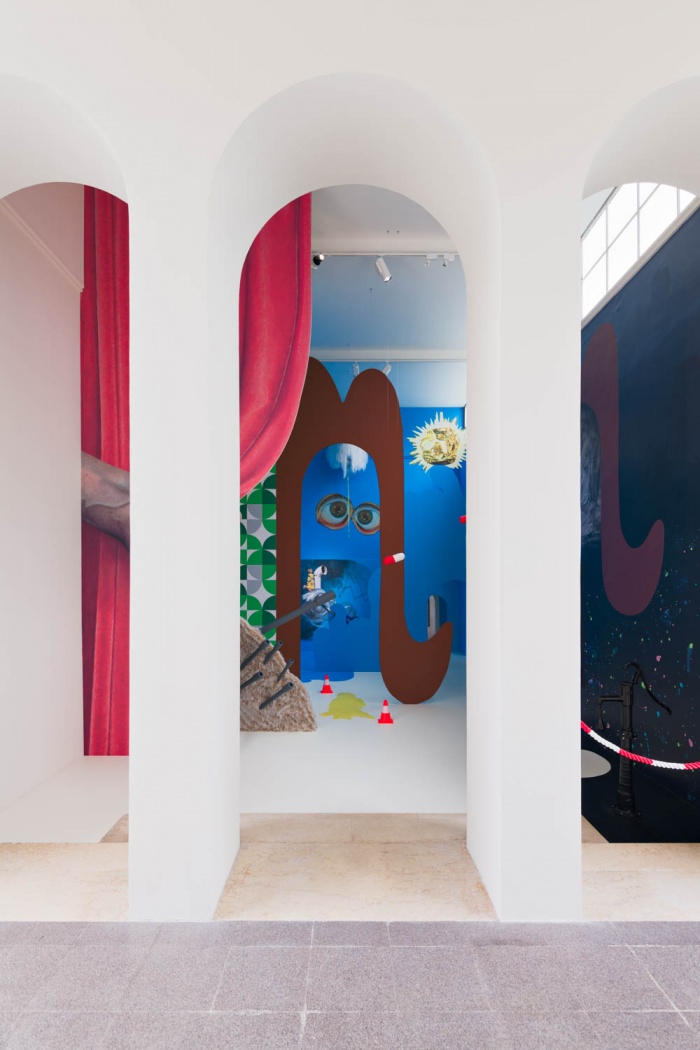 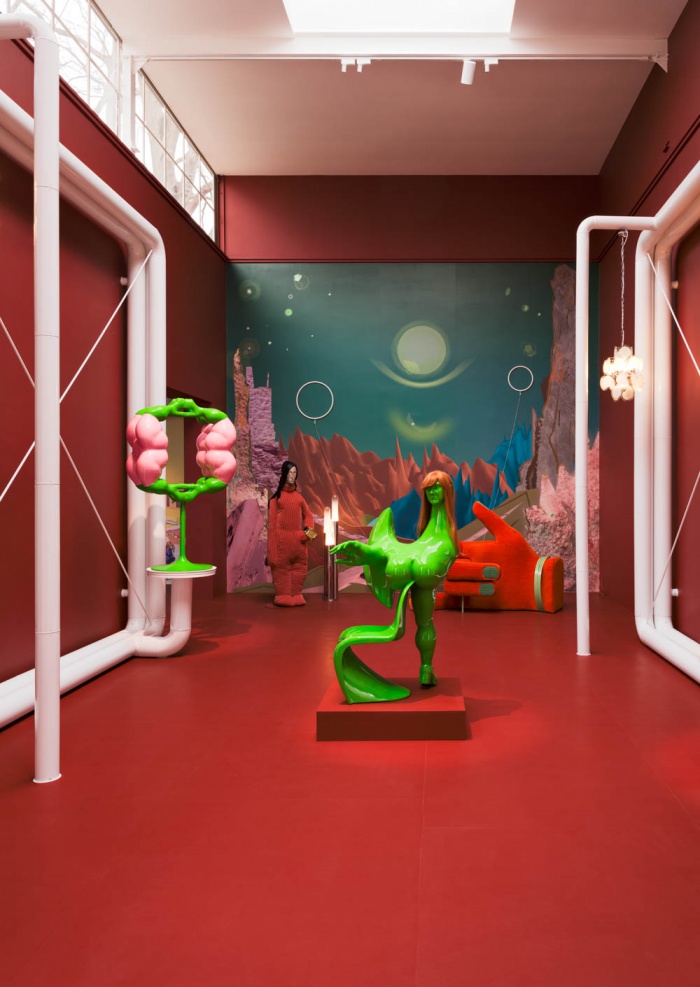 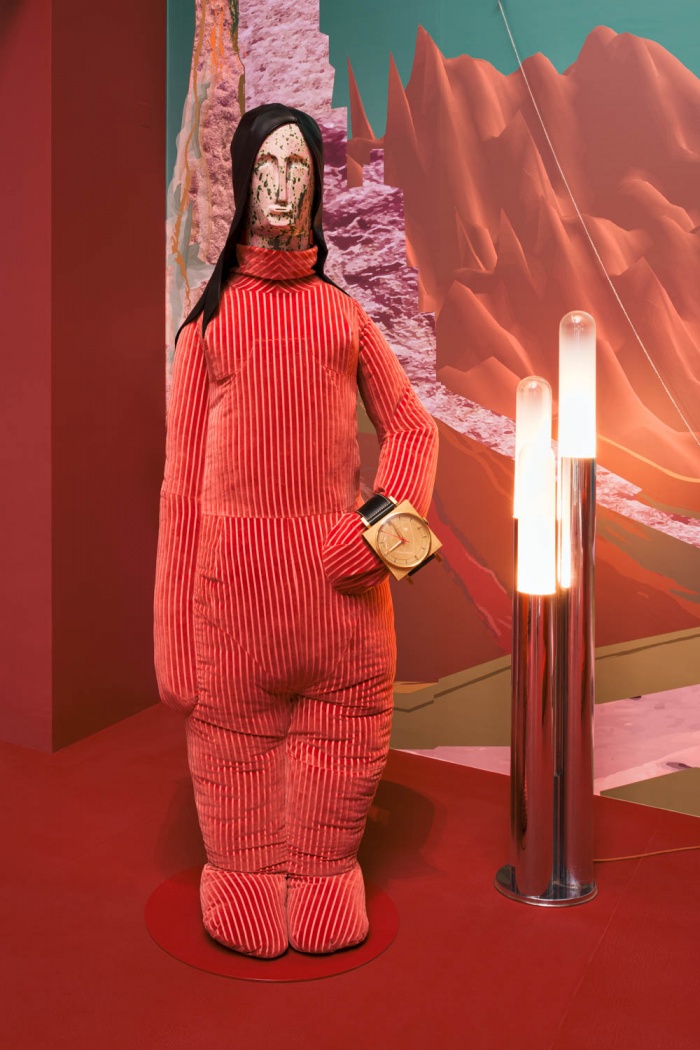 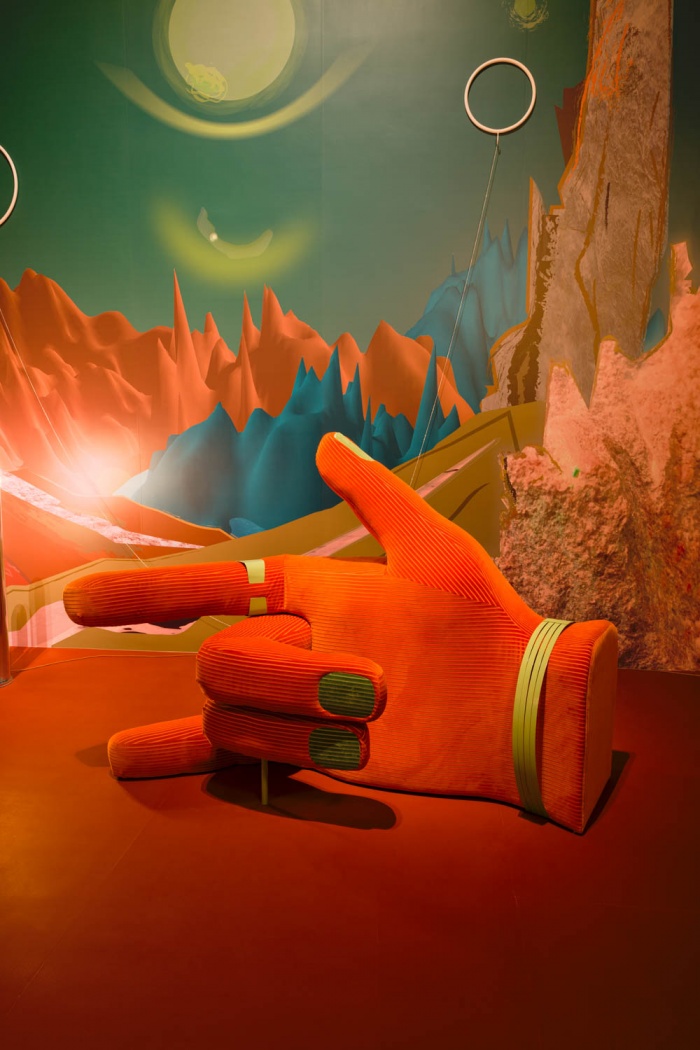 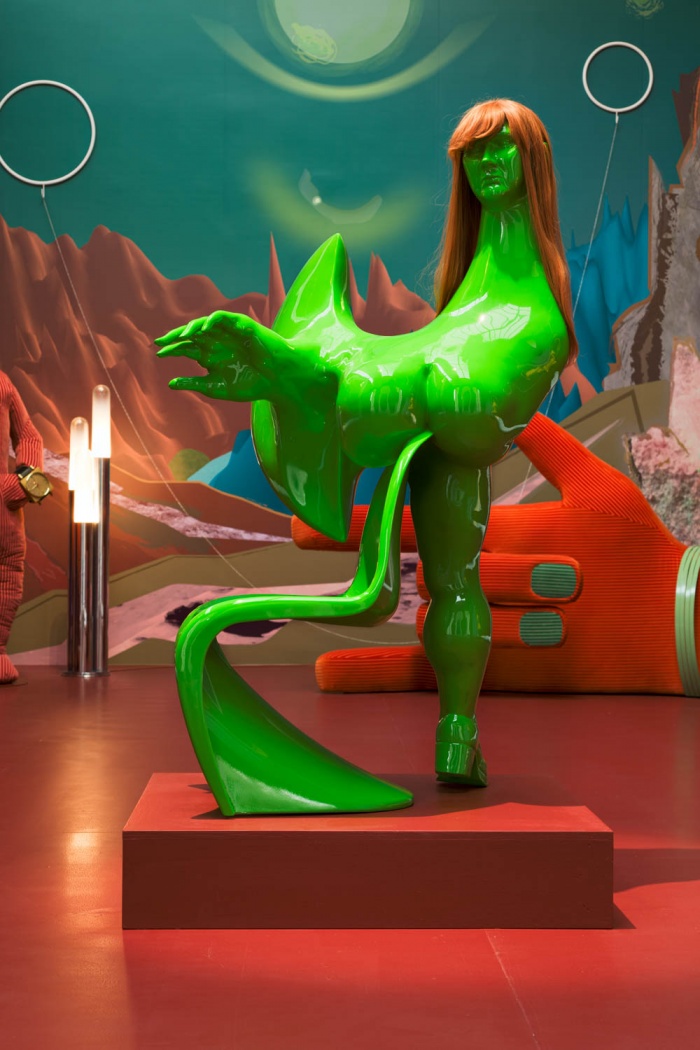 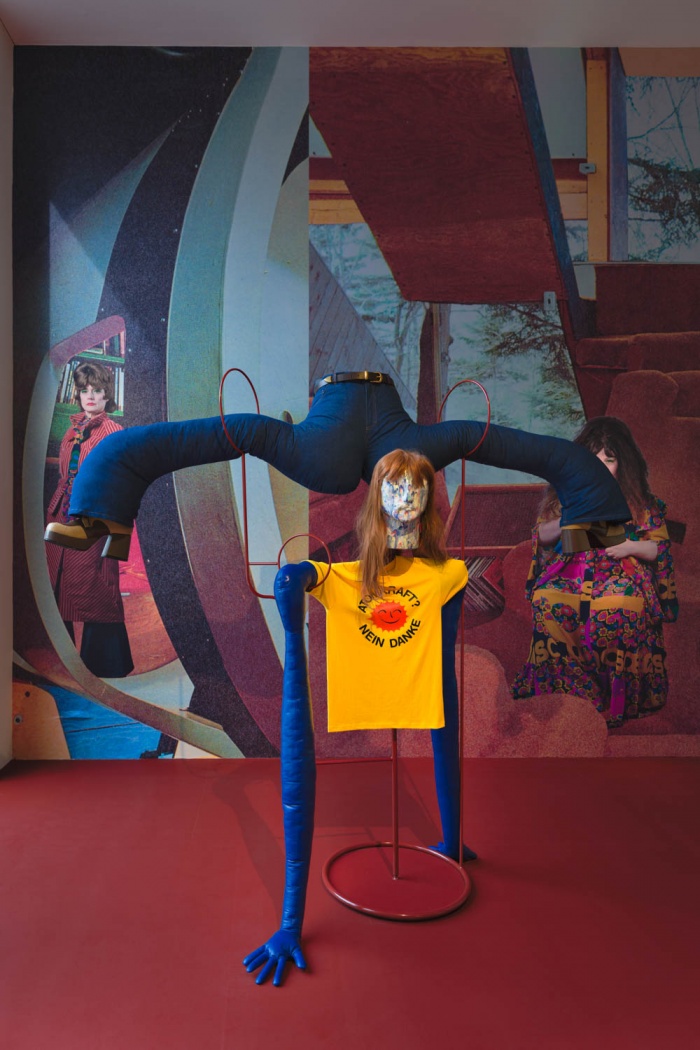 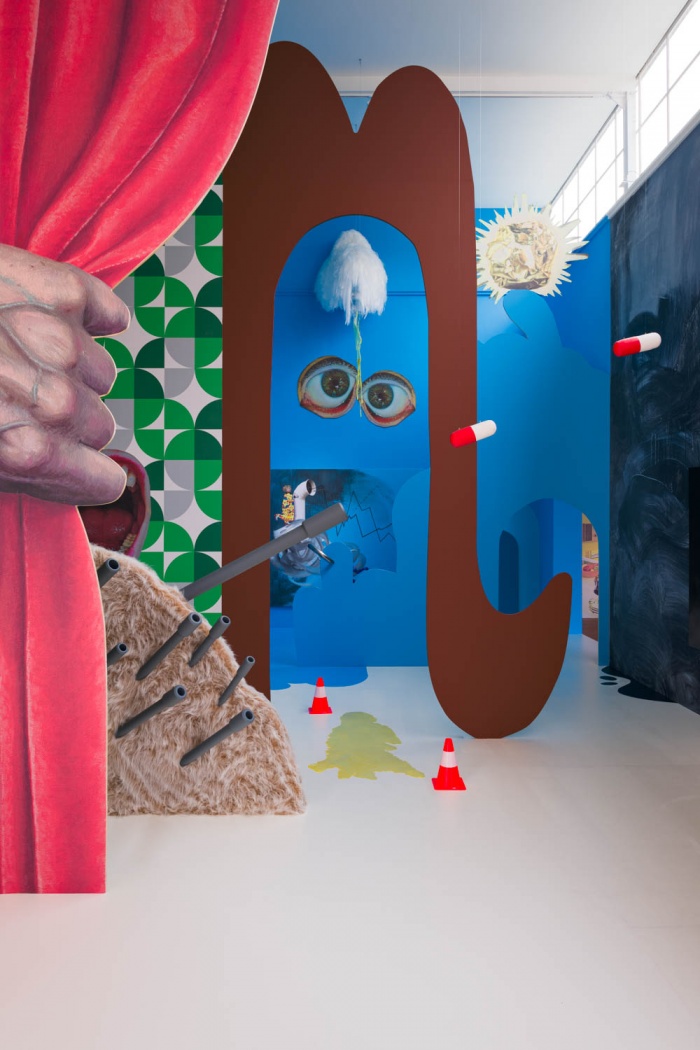 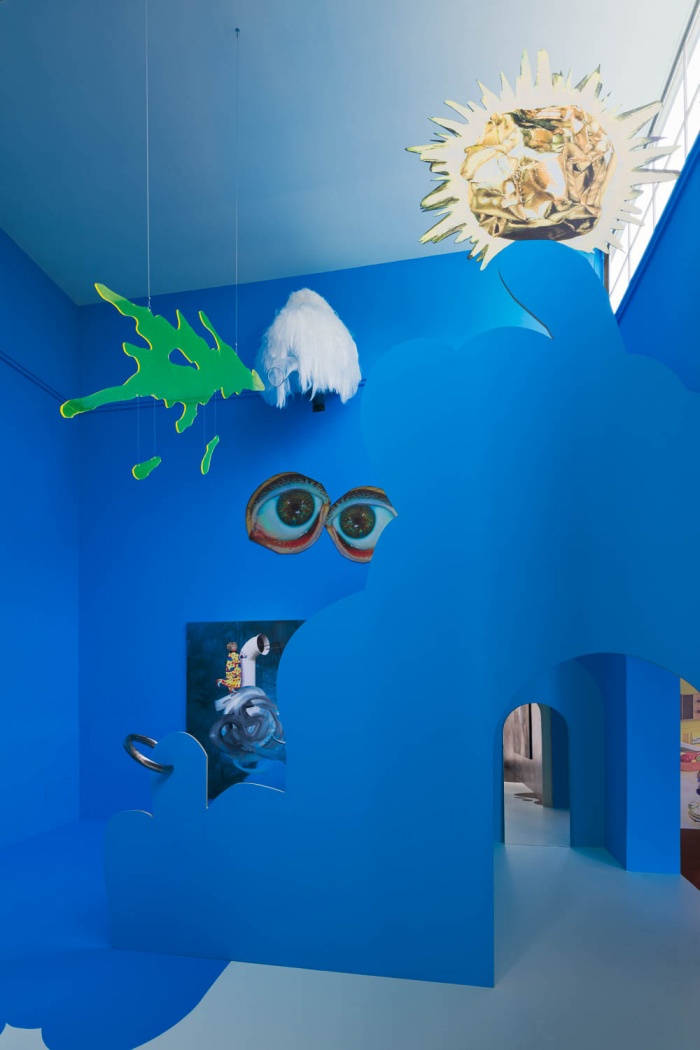 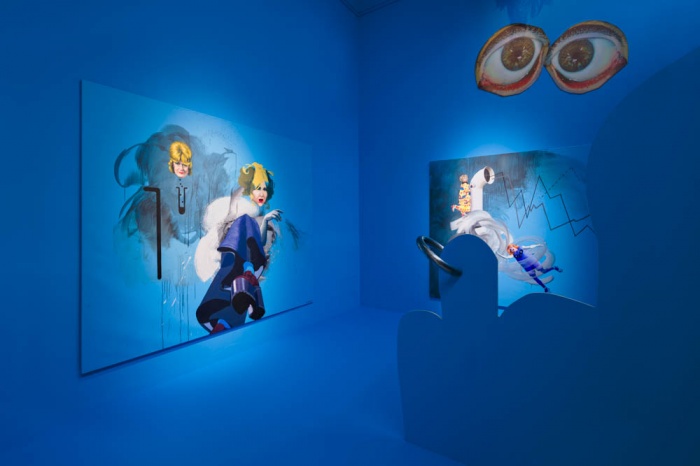 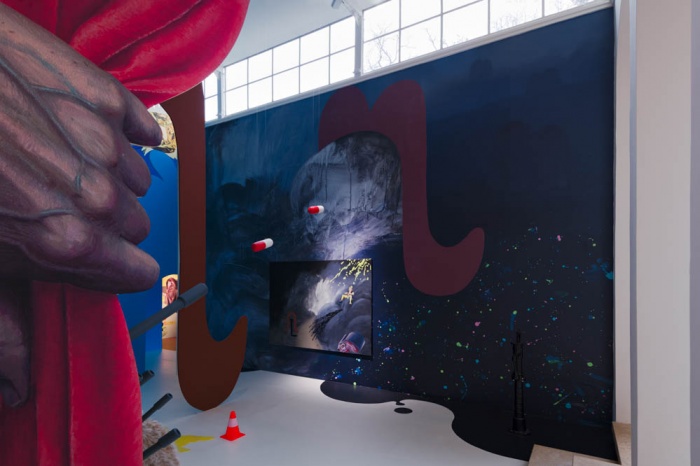 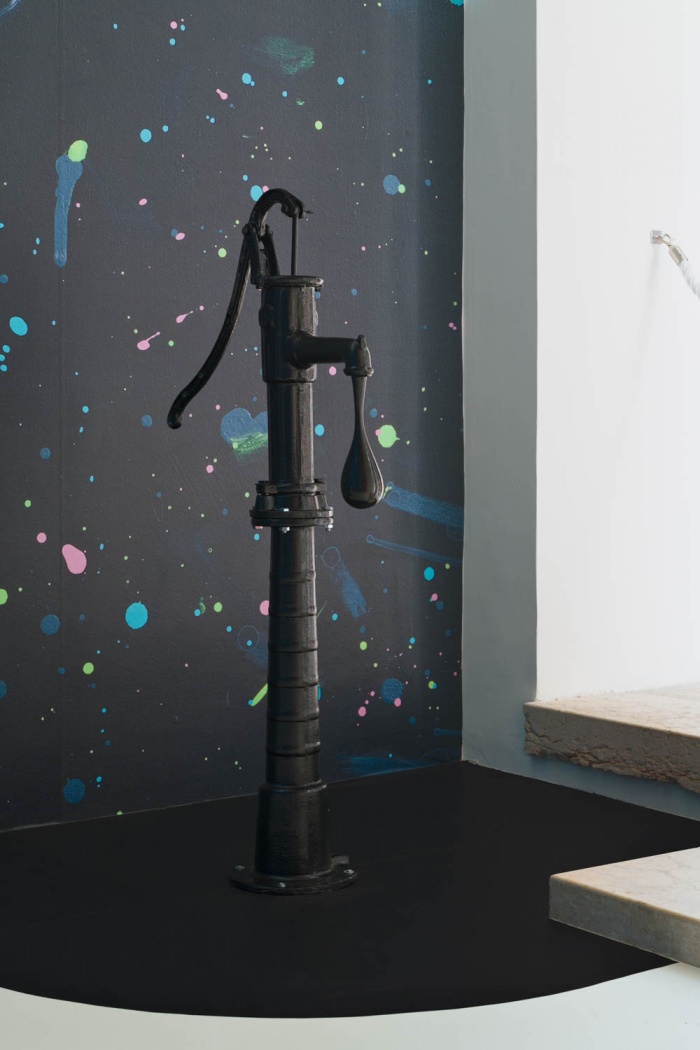 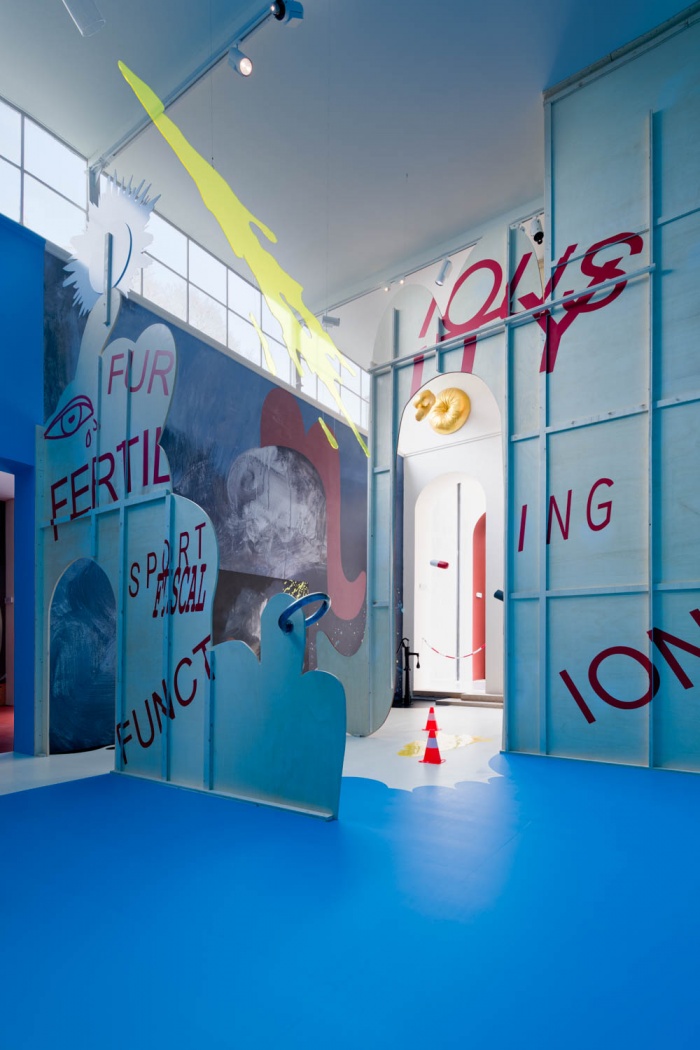